Royal Doulton Character Jug, The film reel and cowboy hat featured on the front of this handle represent the many Western movies Elvis starred in during the 1960’s including: “Flaming Star”, “Stay Away Joe” and “Charro”. Featured on the back of the handle are the boxing gloves used in Elvis’ movie “Kid Galahad”. In this movie, Elvis declined to use a stunt double for the fight sequences and instead trained with former junior welterweight champion Mushy Callahan to prepare for the role. The football represents his starring role in “Trouble with Girls”, which allowed Elvis to participate in his favorite sport during filming. The casino chips found at the bottom of the handle represent the many characters that Elvis portrayed in his films that “took a gamble” in life, including his most famous role in “Viva Las Vegas”, in which he played a gambling racecar driver. Height: 7″ / EP5 Limited Edition of 2,000 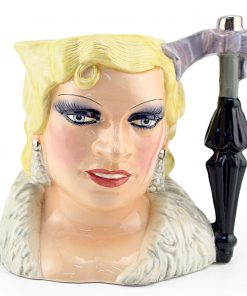