Carrying a pretty umbrella, wearing a jaunty hat and with swirling skirts, Lady Emily Rose is a vivacious personality with a wonderful sense of movement.

As with other years, this year’s figurine once again proves why Royal Doulton leads from the top when it comes to fine collectibles.

Only a handful of Royal Doulton pieces are honored with the title Prestige Figure. These figures represent the pinnacle of achievement for the modelers, artists and potters involved. Prestige figures take months to create and often they involve many separate colors and special glazes.

When you acquire a prestige figure you own one of the rarest Royal Doulton figures ever to be created. In 2005 Royal Doulton introduced the first Prestige Figure of the Year, Lady Sarah Jane. Produced for only one year, each of these prestige figures in this collection represents the finest in artistic achievement ever to emerge from the Royal Doulton studios.. 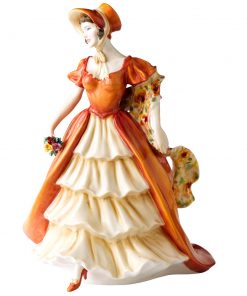