The Palio is a Royal Doulton figure designed by Peggy Davies, issued from 1971 to 1975 in a limited edition of 500. Painted in an exquisite blue, brown and black colorway, it depicts a participant in the Italian Palio event, the spectacular equestrian pageant held every summer in the ancient city of Siena, Italy. 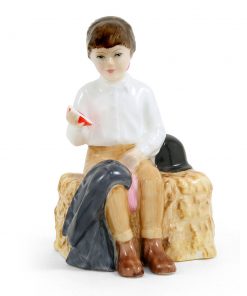