Some of the most famous women in literature have been brought together in Royal Doulton’s Literary Heroines series. Pauline Parsons’ detailed research of the period and careful interpretation of specific moments from the novels have resulted in studies which capture the essence of the author’s literary creations. Each figurine has been issued in a limited edition of 3,500.

Stories and characters from the classics of modern literature were the inspiration for this Royal Doulton collection, The Romance of Literature. Pauline Parsons was selected to model the figures and she carefully researched the fashions and furnishings of the period which enabled her to interpret specific moments from each novel. She succeeded in capturing the essence of the characters as they would have appeared in the minds eye of the authors.. 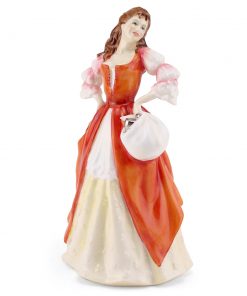