Welcome Home HN3299 – from the Children of the Blitz Series; Limited Edition of 9,500

The evacuation of civilians in Britain during World War II was designed to save lives, particularly children; from the risks associated with aerial bombings of the cities by moving them to areas thought to be less at risk. Operation Pied Piper, which began on September 1, 1939, officially relocated more than 3.5 million people. For the 50th anniversary of Operation Pied Piper, the artists at the Royal Doulton studios created a limited edition series honoring the millions of brave children who endured this turbulent time in British history. 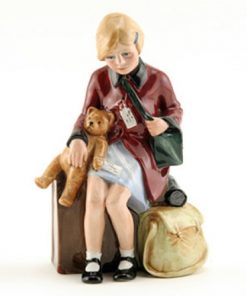