Daughter of Ferdinand and Isabella of Spain, Catherine (1485 – 1536) was married to Arthur, Prince of Wales, in a political arrangement between to two countries. When Arthur died shortly after their wedding, she married Henry VIII to continue the arrangement. This first marriage by Henry lasted 24 years, until he became restless at the lack of a male heir and sought out Anne Boleyn. In 1527 Henry attempted to have his marriage annulled, a move that led to his excommunication by the Pope and, eventually, to the English Reformation. Catherine was banished from the royal court and lived until the age of 50, unhappy and lonely. 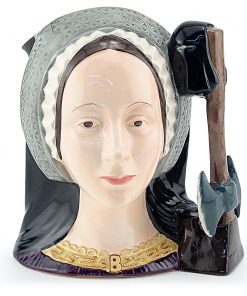