Who was Cliff Cornell? Despite their strong physical resemblance, he was not the alter ego of Winston Churchill. Clifford Black (“Cliff”) Cornell was the founder, owner, and president of the Cleveland Flux Company of Ohio. A consummate self-promoter and master of public relations, Cornell (1892-1960) knew the value of “branding” long before the concept caught fire on Madison Avenue.

Starting in the 1920s, Cornell put his name, and the name of Cleveland Flux Company, on numerous promotional items, which were given as gifts to customers, friends, and business associates. Some of these rare items are still circulated among collectors, and none are more in demand than the custom-produced Royal Doulton Cliff Cornell Toby Jugs.

Toby Jugs are pottery sculptures made in the form of a seated person, often depicted holding a drink. (Jugs that depict the head and shoulders of a person are strictly called “Character Jugs.”) The original Toby Jug, with a brown salt glaze, was popularized by Staffordshire potters during the 1760s.

In 1939, Royal Doulton began producing Toby Jugs, primarily of historical and literary figures, but also as private label promotional items, including for Charrington’s of London in the 1930s (to promote their “Toby Ale”), for Quaker Oats, and for American industrialist Cliff Cornell. 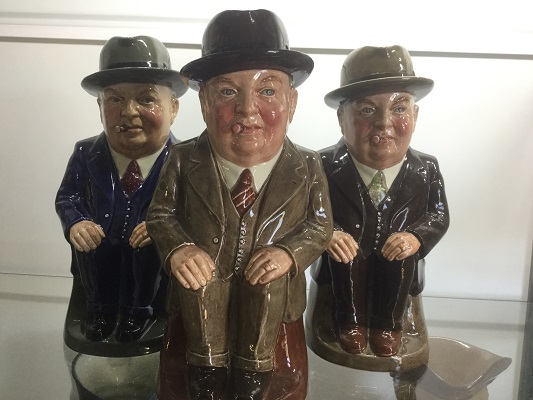 In 1956, Cornell commissioned Doulton to create a portrait Toby of himself, designed in the image of the British statesman, Winston Churchill, of whom, besides their physical resemblance, he was reportedly a great admirer. (Cornell requested that his Jug portray his likeness as closely as possible to that of the British Prime Minister.)

The Cliff Cornell Toby Jugs were produced in three different colorways, and two sizes, with Cornell wearing either a blue, dark brown, or light brown (tan) suit, and various matching ties; 500 each of the dark brown and blue suited-Cornells were made, while just 250 of the light brown suit version were produced. The Jugs’ bases were inscribed, “Greetings Cliff Cornell ‘Famous Cornell Fluxes’ Cleveland Flux Company.”

Cornell-commissioned Jugs were sent as gifts at Thanksgiving, along with a holiday card saying that Cornell was sorry he could not be there himself, but he was sending the Jug with his greetings and compliments.

Along with these hard-to-find Toby Jugs, in his lifetime Cornell commissioned many other private label promotional items which feature his name and/or the name of Cleveland Flux Company. These can be found in collections or at auction, and include:
• Colonial Breakfast Skillets (“Compliments of Cliff Cornell”)
• Gillette “Cleveland Flux Co.” Travel Safety Razor Set (commissioned in the 1940s)
• Travelling Natural Bristle Brushes
• Letter Openers
• Cake Platters