Lucrezia Borgia HN2342 was the daughter of Pope Alexander VI. She is said to have been an ideal Rennaisance beauty, with long blond hair. At 22, Lucrezia had already been divorced, widowed, pregnant out of wedlock and about to enter her third marriage. It is widely believed that the Borgias got rid of Lucrezia’s first two husbands when they found them no longer useful in their political schemes. After the death of her father, Lucrezia led a peaceful life with her third husband, and their court supported many artists and philosophers. 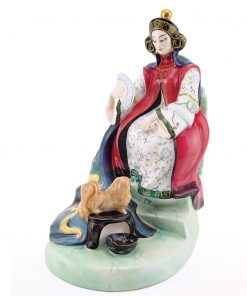