Although considered a character jug, this version of Winston Churchill, measuring 6.5″ tall with two black handles at the back is actually more like a loving cup. The inscription on the base reads “Winston Churchill Prime Minister of England. This loving cup was made during the “Battle of Britain” as a tribute to the great leader.” Unfortunately this jug was considered a poor likeness of Churchill and it is reputed that a friend of the Prime Minister suggested to Royal Doulton that is be withdrawn, making this example extremely rare in today’s market. In 1941, Royal Doulton’s Art Director, Charles Noke, made several more unsuccessful attempts to remodel and recolor the jug with a more youthful face. These attempts are rarely seen as prototypes.
Issued from 1940 – 1941. 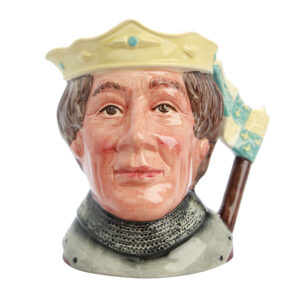